Chapter 168
Tilly Wimbledon is the second princess of the Kingdom of Graycastle, the fifth child of King Wimbledon III and his Queen, and the leader of Sleeping Spell. While she is not their leader, the Witch Union also seeks her help on occasion.

She has grey hair, characteristic of the Wimbledon family.

Tilly Wimbledon is a kind person who helps all she is able to. She is also a rational person, thinking of logical reasons for any event or action that takes place.

She does not take risks, be it about her own life or her subordinates' lives, and tries to think of every possibility to ensure maximum gain at minimum losses.

Tilly loves flying and her "toy" The Unicorn, the first airplane built in her world.

Tilly was born the youngest among Wimbledon III's children. None of her siblings were particularly close to her. She was bullied by her brother Roland in the past.

According to the Royal Decree she was sent to Silver City.

Tilly was mentioned by Timothy's men to be missing after claiming she was going to return home as ordered.[5]

She is later revealed to be leading her own society of witches in the Fjords.

She learns of Roland's endeavors, and immediately suspects he has either been replaced, or is under someone else's control.

She's also able to manipulate her own mana without any guidance or tools, which allows her to use magic stones.[6]

As an extraordinary witch, she can sense the form and flow of magic power. Thanks to this, she could once sense Ashes in a crowd and knew she was a witch.

Enhanced Intelligence: Her ability manifests itself as genuine intelligence,[6] which enables her to be a master of academics, politics, management and etc. from a young age. This also includes mastering her personal planes Unicorn and Phoenix.

Tilly initially had a negative relationship with her fourth brother due to his constant bullying and general ineptitude. However, she's shown to at least have some sympathy for him as a family member.

While she does not fully understand that her brother technically is already dead and the soul of someone else has taken up residence in his body, Tilly has accepted the new Roland and is impressed with his never-ending ideas to improve humanity.

Ashes is Tilly's closest confidant and lover. It seems they keep their true relationship a secret from the rest of the Sleeping Island. She mourns her loss.[7] 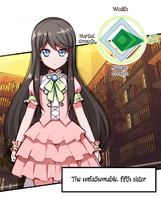 Add a photo to this gallery

Retrieved from "https://releasethatwitch.fandom.com/wiki/Tilly_Wimbledon?oldid=8167"
Community content is available under CC-BY-SA unless otherwise noted.