Release that Witch Wiki
Register
Don't have an account?
Sign In
Advertisement
in: Characters, Male Characters, Fjord Islands,
and 4 more

Chapter 146
Thunder is the greatest explorer of the Fjords. He is also the father of Lightning.

Thunder had the typical short blonde-colored hair of Fjords locals, just like Lightning. He was brown-skinned and had a stocky body, rugged-looking appearance, and thick sideburns that were conjoined with the stubbles covering half of his face and his chin.

Thunder is a courageous man, always searching for new things to discover across the ocean.

He is also a deeply loving father, wanting to discover as much as possible, so that his daughter, a budding explorer, will have less to discover and less danger to experience.

To the amusement of Roland, Thunder also has a flair for disguises (litterally). When incognito to avoid Lightning, Thunder dressed in a flamboyant manner to hide his face.

When visiting Graycastle, Thunder often used a disguise to prevent Lightning from recognizing him.[1] His inspiration for it was a deceased explorer friend named Sander Flyingbird which introduced him on the explorer path. Though his friend hadn't made a significant discovery and consequently lived and died in obscurity, he died saving Thunder from a Sea Ghost attack.[2]

Thunder is a skilled leader and sailor, being able to boost the morale of his crew singlehandedly. His experience as a sailor is unsurpassed, and he is known as the greatest explorer because of his exploits.

Thunder is also skilled in deception, being able to use make-up to change his appearance and alter his mannerisms well enough that not even his daughter can recognize him.

Thunder loves his daughter dearly and always brought her along on his adventures. After being separated, he sent his old friend to look for her and was relieved to find out she was safe in Border Town. He has decided to explore everywhere in the world, even at the expense of taking time away from being with his daughter because he wants to lessen the amount of danger she will experience when she inevitably follows in his footsteps. 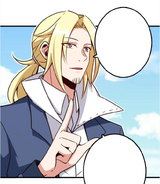