Release that Witch Wiki
Register
Don't have an account?
Sign In
Advertisement
in: Characters, Male Characters, Nobles,
and 8 more

Chapter 14
Petrov Hull[n 1] is a noble of the Honeysuckle family in the Western Region and the current caretaker of Longsong Stronghold. He is part of the Neverwinter city council, representing the Longsong Area.

Petrov doesn't like war-related matters, preferring trade operations and business over battles and aggressive approaches. He is keen to opportunities and takes it before others would realise it. Petrov is smart and observant, following his intuition he warned his father about Roland while everyone else was sure of an easy victory.

Since learning of the Witch Union and that all the Church's propaganda about witches had been lies, Petrov quickly adopted Roland's views. He actively keeps an eye out for witches in Longsong, so he can send them to the Witch Union for protection.

Perov lived for several years in King's City, where he heard all kinds of rumors about Fourth prince Roland Wimbledon.[2]

Petrov once visited Border Town as Duke Ryan's representative one and half year before repeated arrival.[3]

Petrov arrived in Border Town to inspect ore and fur loading. To his surprise, Roland Wimbledon refused to exchange ore for food and informed he had made deal with Willow Town. What shocked him more were news of a new city wall.[3]

At earl Elk's banquet held in honor of his daughter Aurelia's sixteenth birthday he met old friend Rene Medde, they discussed rumors about near fall of the New Holy City of Hermes and enormous losses of Four Kingdoms' armies and the Judgement Army.

While taking glances from Aurelia, he is caught in a hot discussion about Roland's ultimatum. Nobles condemned the prince's actions as reckless and foolish and concluded that Duke Ryan have to do something about it. Rene Medde joined the conversation and boasted he would lead his family's forces.

A week after father's departure Petrov received a letter from Longsong Stronghold, written by Roland Wimbledon. The prince outlined duke's defeat and nobles' release conditions. Soon he arrived at the lord's castle and listened to unusual ransom details. Hearing that Roland would leave Longsong Stronghold in a few days he offered to manage the city on his behalf, which impressed the latter. Next day Petrov brought ransom list and signed an agency contract, after that he went to take away his father. When he found out that Jacques Medde refused to pay for his brother, he offered to ransom Rene. After return to the mansion, he told his father about Roland's conditions and his new status, on that Shalafi advised him to watch over the other great nobles and hire craftsmen from the North.[6]

During the rebellion of the nobles families, His family was killed, except his father, they were taken as hostages, including the Countess. They were being held by the four families in exchange for surrender and subsequently they were executed one by one.

Petrov is talented in territory management and business trades. Though he admits he's bad at administration, having had trouble keeping Longsong's city hall office running properly in the beginning; he had to ask for Roland's help to deal with the officers in charge of city hall who hadn't understood that their positions didn't afford them leeway to do as they pleased. 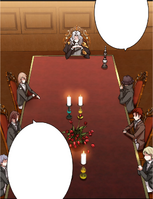