Release that Witch Wiki
Register
Don't have an account?
Sign In
Advertisement
in: Characters, Male Characters, Nobles,
and 10 more

Chapter 19 (manhua)
Osmond Ryan of Lion Family was the Duke of Western Region and the primary antagonist of Volume 1 and the first 29 chapters of Volume 2.

In the manhua adaptation, Osmond Ryan is shown to be an elderly man with long white hair and a monocle. He wears a grey aristocratic shirt with black sleeves and a white jabot. He also wears what seems to be golden shoulder pads with a cloak attached underneath as well as a golden gauntlet on his left forearm.

Duke Ryan was very ambitious and power-hungry, and didn't bear when his authority was contested. He was dissatisfied when Prince Roland was appointed as Border Town's lord but tolerated him due to his origins and confidence in incompetence. Despite the potential benefits of supporting Roland's reign as he developed Border Town, Duke Ryan refused to give his support simply because this would hinder his power.[1]He enjoys exerting his power over his citizens like a tyrant, as Ferlin's trust in him broke when he raped his wife Irene.

Duke Ryan sent an ambassador to inspect ores prepared for transportation.[2] When Petrov returned and told Roland's decision to directly trade with Willow Town as well as his opinion on this matter, he declared that Western Region was his territory and no one is allowed to disobey him, even a prince.[1]

Osmond was dissatisfied with Earl Elk's unauthorised conspiracy, especially when it failed. He planned to coax Roland after winter, but Timothy's order gave him legitimate right to remove the prince from Border Town.[3]

In Longsong Stronghold cold reception shown to Cornelius by Prince Roland as well as his words were widely discussed among nobles. Osmond ordered great nobles to gather forces of around a thousand and five hundred men to attack Border Town.[4]

Osmond's spies informed him about weakened strength of North and the battle between Timothy and Garcia in Eagle City which resulted in the city's burning and heavy losses for both parties. That's why after taking full control over Western Region he planned to conquer Northern Region and establish own kingdom which would be the size of Kingdom of Everwinter. He led Stronghold Alliance forces to quickly suppress Roland's resistance and send him back to the King's City. However his attempt to seize the Border Town failed when his knights that lead the assault were completely decimated by Roland's newly developed, long range cannons, causing him to lose control over the rest of his army as they routed in fear of the cannons. He was eventually forced to retreat alongside his army.[5]

After this humiliating defeat, Osmond attempted to encamp near a river in order to rest and recuperate but his forces were ambushed in the night by First Army. Osmond Ryan was killed by musket fire when he attempted to sally out of his besieged position.

His head was brought by the First Army to Longsong Stronghold to demoralize the enemy and prove that they are victorious. With Osmond's death, the hegemony of the Lion family over the Western Region ended with the presiding lord now being Roland Wimbledon.

Duke Ryan supported elite knightage of 150 knights, whose skills were equal to king's knights, conceding in numbers only. They were responsible for killing the remaining demonic beasts in Western Region every year after the Months of Demons, as a way of ensuring smooth land traffic. Their armor were of high class, decorated with lion head on thick chest part and wolf heads on each shoulder, the cloaks were ornamented with patterns.

It can be assumed that as the duke of the Longsong Stronghold and the leader of the Western Region's Noble Coalition, Ryan had relative skill in both army commanding and domestic management, as well as skills in sword fencing and horse riding.

Duke Ryan mostly dismissed Roland at first due to the bad reputation that preceded the prince, allowing the fourth prince to languish in Border Town, believing that the town will eventually return to his rule. However, he would soon grow to despise Roland (who was now actually Cheng Yan in Roland's body) as the prince started to unexpectedly reform Border Town and break it away from the Duke's sphere of influence. This ultimately culminated in an attack on Border Town led by the Duke himself. Even after acknowledging Roland's achievements such as quickly building a city wall and fending of the demonic beast, Duke Ryan would continue to look down on Roland as an incompetent noble up until his death.

Due to the duke's assault on his wife, Irene Eltek, Ferlin Eltek became an enemy of him, waiting for his chance to take revenge. That was the reason why he didn't play an active role in the duke's battle against Roland. He later expressed his gratitude for Roland for killing him.

Duke Ryan hosting a meeting with the other noble families to discuss the events in Border Town.

Osmond as he expressed his opinions on Roland's actions in Border Town. 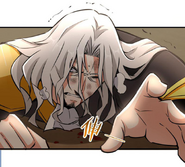