Release that Witch Wiki
Register
Don't have an account?
Sign In
Advertisement
in: Characters, Female Characters, Witches,
and 6 more

Chapter 222
Lotus is one of Tilly Wimbledon's witches. She was sent to Border Town as one of the first 5 witches to be sent there by Tilly.

Her age is similar to Nightingale’s, she had short voluminous black hair, and a “pretty daughter from a humble family” type of face. Her overall appearance looked quite lovely. With a small size of around one meter fifty and a skinny body, when comparing to the tall Nightingale, she looked like a little girl who has yet to fully grow up, giving off a sense of weakness.

In the manhua adaption, Lotus wears a white dress with flowing sleeves a slits on both sides of the skirt to allow her legs freedom. The chest area appears to be hollow and replaced with a purple shirt of some kind.

Awakening: She can control the ground. She built houses out of mud, created the wall around Tilly's Island to keep the tide out, and raised a part of the riverbed near Border Town as support for an arc bridge.

Lotus has great trust in Tilly as a leader. 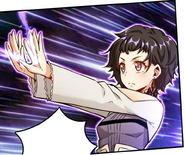 Stone Wall created by Lotus and her at its right.