Littletown is a two mast barge-like concrete ship built by Roland Wimbledon. The first boat made of concrete, she was specially created to transport cannons down the Redwater River to Longsong Stronghold. Roland designed her taking into account Wendy's magic ability.

Due to this he chose barge design because of shallow draight and low center of gravity providing neccesasry stability on the river.

Near the Redwater River was built shed with walls as close to water as possible, where two pots of charcoal were put in the room to avoid the impact that low-temperature had on the hardening effect of the concrete.

The carpenters created the basic template of the hull. The round bow would reduce the forward resistance, and the square stern would increase the loading area. The width of the boat was about 8 meters and its dimensions ratio was 3:1, while conventional ships' ratio was 8:1. In the center, they set up two masts, inserted into the bottom and connected to the iron beams passing through her centerline. At the stern, they set up a stake reserved for the rudder. Other places were crisscrossed with iron bars.

Once the template and rebar were ready, Roland ordered the workers to start the pouring operation. The middle of the template was flat, and the walls were one and a half meters high, forming the cabin walls[1].

The deck was made of wooden planks supported by stakes placed between bottom and deck. After this it was covered with several layers of oil and paint to make it corrosion proof.

Superstructure was a wooden shed which was placed between the two masts, and which was used to store cannons and ammunition or shelter crew on a rainy day. A platform was added at the top of the roof where Wendy's range of magic ability was enough to cover the entire sail.

The stern rudder was made of pig iron, the tiller went through a reserved hole under the water, and then appeared again on the deck, where an iron ring was put on it. The buckle was a right-angled triangle plate, with the long side welded on the tiller, and the short side could freely rotate in the groove of the iron ring[2].

When Roland found out he couldn't afford regular ship he decided to build his own. Since he had no specialists to build wooden ship and lacked metal to build both ship and firearms he chose concrete material[1].

After a week of hardening the concrete hull, to the surprise of gathered crowd, was successfully launched and tied to bollards. After launching workers installed deck and superstructure.

Soon artillery teams started to train loading onboard and fastening the cannon on deck[2]. 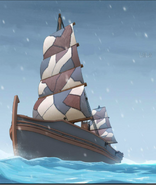 The Littletown in Manhua

Ditto
Add a photo to this gallery

Retrieved from "https://releasethatwitch.fandom.com/wiki/Littletown?oldid=6802"
Community content is available under CC-BY-SA unless otherwise noted.