Release that Witch Wiki
Register
Don't have an account?
Sign In
Advertisement
in: Characters, Male Characters, Nobles,
and 7 more

Chapter 24
Hills Medde also known as Fierce Scar was a patrol member of Border Town. He was a minor noble, but had no title or lands.

Hills had a noble relative in Longsong Stronghold, Earl Luke Medde. Due to this he had a high position among the patrol team.[1]

Hills planned to sabotage Roland's plan to survive the Months of Demons by burning the grain storage in the lord's castle. He engaged in the conspiracy all patrol members who weren't born in Border Town and wouldn't mind leave town people without food in the coming winter. In exchange for this, all of them would get the title of a knight and land to the east of Longsong Stronghold.[2]

At night the conspirators led by Brian, infiltrated the castle through a tunnel. They were caught off guard when Brian and one of them jumped downstairs. In a clash Hills was wounded and wished to personally kill Brian, but was stopped byNightingale.[2]

Hills confessed to conspiracy and was sentenced to death.[3] 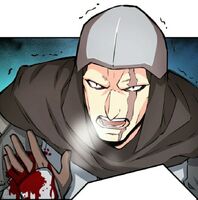