Gerald Wimbledon was the first prince of the Kingdom of Graycastle.

Gerald Wimbledon had grey hair, a distinctive feature of the royal family. Due to his constant sword practice, Gerald was a sturdy and muscular man.

In the manhua adaptation, Gerald has a scar on his face and has spiked grey hair. He wears a black suit of armour with red accents and has a red cape attached under his shoulder pads. He also has a black fur accessory attached to his armour.

Gerald considered himself to be the rightful heir of Graycastle. He admitted he wasn't smart when compared to his brother Timothy, but believed that the most important thing to being a king was having loyal retainers. He was irritated by the king's decree, and wished to talk to his father face to face in order to "convince" him to cancel the competition and reinstate him as heir.

He loved Olivia to the point that he refused to court any of the noble ladies of the kingdom, which led to rumours of his homosexuality.[1]

Every year Gerald was sent to Coldwind Ridge as the Kingdom of Graycastle's commander to lead the defences against the Demonic beasts' invasion during the Months of Demons. While on one such assignment he met a local tavern girl and fell in love with her. Due to her status, he couldn't marry her or make public their relationship, however he secretly bought a house for the two of them.[1]

According to the Royal Decree on the Selection of the Crown Prince, in which each potential heir was designated a region to govern, Gerald was given control of Coldwind Ridge.[2]

While at the Holy City of Hermes, Gerald wrote a letter to Olivia. In this he shared his impressions of the city as well as his plans to return to the capital with his knights in order to talk with his father.[2] After being persuaded by his astrologer, he believed if that nothing was done he would lose the throne.

Several months after his departure to Coldwind Ridge Gerald returned to the Capital. He travelled to the royal palace, only to discover the king dead and his brother Timothy in his chambers, surrounded by armoured guards. After being informed by his brother that his astrologer had betrayed him, and after realising that he had fallen into his brother's trap, Gerald attempted to attack Timothy but was instead captured and imprisoned for the murder of the king.[3]

Gerald's trial was rushed, he was interrogated with his hands bound and mouth sealed. He was convicted of the king's murder and beheaded.[4]

Gerald was an able military commander, a trained swordsman and a skilled rider.

Gerald was deeply in love with Olivia. He knew that she couldn't become his wife while he was first prince, and so he planned to marry her after succeeding his father. He conceived an illegitimate child with her.

Timothy, Garcia and Gerald were very close during childhood, and often played together. They would often gang up to bully Roland. As the years passed they became estranged which Gerald later regretted. 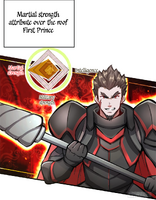 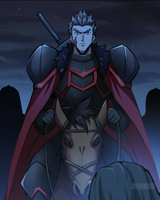 Gerald Wimbledon mounted atop his horse. 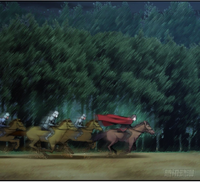 Gerald returning home with his retinue.

Gerald entering the King's castle.
Add a photo to this gallery

Retrieved from "https://releasethatwitch.fandom.com/wiki/Gerald_Wimbledon?oldid=7796"
Community content is available under CC-BY-SA unless otherwise noted.