Release that Witch Wiki
Register
Don't have an account?
Sign In
Advertisement
in: Groups and Organizations, Kingdom of Graycastle, Humans,
and 4 more

'Garcia's Army' is the non-official name used to refer Garcia Wimbledon's military forces during the Royal Decree for Crown Prince. Garcia's Army continued to serve under her until The Siege of Wolfheart City and Garcia's subsequent 'disappearance' after the Church successfully annexed the city. Since they are never mentioned again after the battle, it can be assumed that all of its members are either deceased or had since defected to the Church.

Garcia's army was the most diverse in comparison to other human armies, comprising of her personal knights and retainers, the Blacksail Fleet, warriors from the Sand Nation and eventually a coalition of nobles from the Kingdoms of Wolfheart and Everwinter. 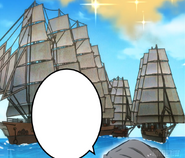 Garcia looking down upon her fleet.