Start a Wiki
The flintlock is the first firearm introduced by Roland to counter demonic beasts and Duke Ryan forces. It was eventually replaced by revolver rifles in First Army, but still used in combat training of loyal Sandpeople. Crude prototypes of flintlocks (mostly Fire Lances and are implied to use a matchlock mechanism instead of a flintlock mechanism) appeared within ranks of Western Region rebel nobility, provided by Timothy Wimbledon.

Flintlock is a muzzle-loaded gun, which shot lead balls after gunpowder and ball have tampered into the barrel and another portion of gunpowder loaded into the flash pan.[1] Trained soldiers could make 3 shots per minute; its effective distance is 100 meters.

Initially, it was made manually by craftsmen, and because of this Roland could produce only four flintlocks before Months of Demons has begun. With constructing of more precise Steam Engine II he could start boring of barrels from iron bars, making 10 barrels per day and equipping a hundred of soldiers by the end of winter.[2]

For defence in melee, Roland invented a casing bayonet. The end of the shank had a corner and was connected to a casing. The casing diameter, which was slightly larger than the barrel, was attached to the Z-shape tongue and groove joint. The barrel only needed to be welded with a small iron bar, so that the tongue and groove joint could be embedded in to fix the blade. The blade was a sharp triangular iron cone, its cross-section similar to a V-shape. Such a form did not affect the pulling out, yet leaving a wound that was difficult to heal.[3]

Roland holding one of the first flintlock rifles, as illustrated in the manhua adaptation. 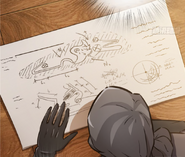 Roland's blueprints for the flintlock. 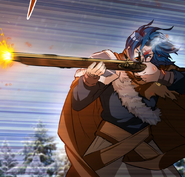 Iron Axe using the flintlock.
Add a photo to this gallery

Retrieved from "https://releasethatwitch.fandom.com/wiki/Flintlock?oldid=7018"
Community content is available under CC-BY-SA unless otherwise noted.