"Just like what His Highness has said, only an army of people will fight for people."

- Artillery Team Captain Van'er repeating what Roland Wimbledon said on the nature of the First Army The First Army is Roland Wimbledon's military force, equipped with firearms and artillery. Its discipline and overwhelming firepower make it the strongest military unit among the Four Kingdoms.

First Army has several features distinguishing it from other armies: discipline, logistics and equipment.

Roland views discipline as a main merit of a soldier. All soldiers of unit must strictly follow orders. They are prohibited to break orders, rape, plunder or extort. If soldier violated the order but achieved merits in battle, he would be punished nonetheless. Compared to noble armies which rarely obey to lord of their lord, every soldier obeys to Roland and commander assigned by him.

Unlike feudal armies who need up to half a month to gather armies, First Army is ready to advance on the same day as orders were received. Soldiers are carried by fastest means possible which would guarantee early and unexpected blow. All necessary munitions and supplies are calculated and provided by City Hall.

First Army is the only unit fully equipped with firearms. In front of rifles any armor is useless, while HMGs deal with swarms of enemies. Artillery hits the enemy from safe distance several times exceeding range of mangonels and breaks any stone wall.

In accordance with the rules of the First Army, any pre-war combat strategy must have a paper record which should be audited and signed by officers at a corresponding level, and a plan signed by His Majesty himself must be unconditionally executed.[1]

First group of Militia's recruits consisted of a hundred men.[2] The second recruitment brought 200 men, thus Roland had 300 soldiers under his command.[3] By the time that the First Army conquered the King's City of Graycastle, their forces totalled 3000 men with Roland giving the order to further expand their numbers. Current forces number over 10,000 - 30,000 men.

First serious attack of demonic beasts happened a week before Anna's Day of adulthood. Various species assaulted the wall in unusual coherence. Soon a huge tortoise-like hybrid beast appeared, slowly advancing towards the wall. After failed attempts to penetrate it by arrows and lead balls, it broke through the wall only to be killed by explosive package. However, in a breach rushed demonic beasts and Anna had to cover it with wall of flame, revealing herself in front of Militia.[4]

The continious success of Militia in defending the wall attracted more people, the second group was an auxiliary force for the first one.[3]

In four days after Nightingale's return horn sounded again. This time it was intelligent four-winged hybrid, who avoided traps and crossed unprotected side of the wall. Leaving some men behind, Roland, guards and Militia rushed to the town to capture him. The demonic hybrid killed a civilian and a member of Militia before he was shot by Iron Axe.[5] Roland held a funeral to honor deceased militiaman and paid his family 5 golden royals as compensation.[6]

After Victory Day Iron Axe announced that Militia would be reformed into regular corps. If anyone wished to quit one was guaranteed full salary and 25 silver royals as retirement fee. He explained new corps would have stricter discipline and punishment, more vigorous training and chance to be promoted to officers which could be rewarded with land and higher salary. To Iron Axe's pleasure nobody quit, and he commanded to start training.[7]

Spear squads were the most numerous consisting of ordinary people trained to thrust spear. They had to kill small beasts and hold stronger demonic species.

Hunter squad consisted of hunters skilled with bows and crossbows, it was the main force to kill demonic beasts.

Flintlock squad was equipped with flintlocks, they handled tough demonic beasts or hybrids who wouldn't die from bolt or arrow. By the start of Months of Demons only four men possessed firearms: Iron Axe, Carter and two elite hunters,[8] but by its end Flintlock Squad increased to a hundred men.[9]

Militia members wore brown and gray leather armor. Reorganized First Army kept this uniform until the Demons invaded wherein it was phased out in favor of Camo.

Roland overlooking the formation of the original members of the Border Town Militia.

The Border Town Militia participating in their training drills. 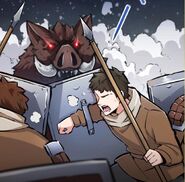 The First Army fighting against the Demonic Beasts 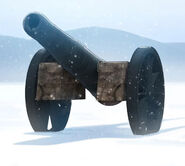 The Artillery Team firing a cannon

The First Army performing their usual training drills during the Month of Demons.
Add a photo to this gallery

Retrieved from "https://releasethatwitch.fandom.com/wiki/First_Army?oldid=7994"
Community content is available under CC-BY-SA unless otherwise noted.