Demonic hybrids are dangerous species appearing during Months of Demons along with demonic beasts.

It was much later revealed that some hybrids are almost indistinguishable from their original forms as beasts.[1]

Hybrids rarely appear during the Months, they lead demonic beasts and coordinate their attacks. Usually those attacks are most intensive.

During Roland's first Months of Demons the wall was attacked by tortoise hybrid once and by flying hybrids twice.

Some demonic hybrids may gain primitive intelligence while others possess extremely durable bodies.

The hybrid looks like giant tortoise with two wolf heads, it has six short and thick feet in the shape of rhino's legs. It was 6 meters long and about 4 meters high. The shell protected the hybrid from head to tail, its surface had a dim grayish brown color and was covered with moss.

Though the hybrid's speed is low, its shell couldn't be penetrated by arrows and flintlocks. It can hide head and legs under it, protecting itself from arrows and bullets, thus turning into a living tank. It can vibrate with high frequency, destroying stone walls.[3]

An enormous monster who has four stout fangs, four legs and two arms. Its body is covered with pitch-black fur, and every one of its legs was as thick as the torso of a wolf-figure hybrid. From a distance, the monster resembles a fortress that could move. When two of them appeared on the Hermes Plateau, every step they took left a deep imprint on the permanently-frozen plains. Any accompanying demonic beast which did not evade its legs in time were plunged into the ground and were turned into a pool of blood and flesh.[4] 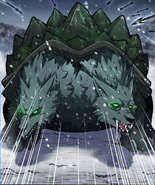 Flying Demonic Hybrid
Add a photo to this gallery

Retrieved from "https://releasethatwitch.fandom.com/wiki/Demonic_Hybrids?oldid=6524"
Community content is available under CC-BY-SA unless otherwise noted.