Release that Witch Wiki
Register
Don't have an account?
Sign In
Advertisement
in: Articles in need of citation, Magic, Demonic Beasts,
and 3 more

Demonic beasts or evil beasts (魔族、魔兽、邪兽), are wild animals transformed into ferocious beings by Sky-sea Realm during the Months of Demons. They assault villages until the Months are over and retreat with first rays of sun. They attack humans and demons alike, had been forcing both sides to reduce fighting during second Battle of Divine Will.

Demonic beasts resemble animals they originate from. They have black blood and mutated bodies and after getting killed they decay very quickly leaving behind only their blood which look like blackened water.[1]

Every year demonic beasts terrorize population of defenceless villages, urging people to hide beyond city's walls, waiting for the Months to end. When it happens, knights move out to kill remaining beasts. After returning home, villagers sometimes have to repair broken houses and belongings if beasts turned it into a den.

The longer the Months of Demons are, the more ferocious the demonic beasts will be.[2]

As revealed in chapter 1418, according to the demons, the demonic beasts are... [Hide Spoiler] a branch of the Sky-sea Realm monsters, similar to that of the Inferior Demons of the demon race. At every Months of Demons when magic power becomes abundant, the 'Nest', a type of Sky-sea Realm creature, unleash a large amount of spores that scatter through the ocean and wind, infecting ordinary wild beasts and transforming them into various grotesque monsters that underwent mutation and bloodfests. The Sky-sea Realm treats them as 'harvest fields' to collect desirable traits and never saw the demonic beasts as their main fighting force.[3] They don't have a long life expectancy and to make up for it, the 'Nests' are able to breed new beasts quickly.[4][Show Spoiler]

Transformation strengthen animals' capabilities making demonic beasts faster, stronger or more durable. Without elite forces, such as knights, or walls' protection it is hard for regular people to deal with them. Their intelligence rarely changes, which is what makes traps effective countermeasure against demonic beasts[5].

From the demons' perspective, the demonic beasts are weak in terms of combat ability and are of no threat to the race.[3]

Every year a horde of demonic beasts invades Old and, more recently, New Holy Cities. To withstand it the Church concluded an Agreement on Months of Demons with the Four Kingdoms, which obliges the latter to send forces in the fight against beasts[6].

“This is the name of the demonic beast, your highness. The more fierce the variation of the animals was before, the more difficult it would be to deal with variation after. And they will emphasize the advantages of the body. The wild boar, its back fur would become extremely tough, even within a range of 50 yards it would be difficult to hurt it with a crossbow. The wolf species becomes more cunning, the running speed becomes amazing, to kill it, you need to set up the trap in advance.”[7]

“Stronger would become stronger and faster even faster,” Roland nodded as he heard this, “But they are still animals.”[7]

Frontal View of a Demonic Wolf

Demonic Fox Struck by an Arrow 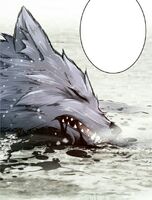 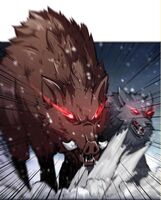 A demonic boar alongside a demonic wolf

A group of various demonic beasts

A pair of brown-furred demonic Foxes