Release that Witch Wiki
Register
Don't have an account?
Sign In
Advertisement
in: Locations, Cities, Kingdom of Graycastle,
and 6 more

Neverwinter City is located in the most western part of the Graycastle Kingdom, bordered in the north by the Northern Mountain Slope and in the west by vast Hidden Forest. To the east, a road leads to the Longsong Stronghold. On its south runs the Redwater River and going further south there is another Mountain Range, which gives way then to the Sea.

From the start, the establishment of the Border Town was to provide an early warning to the Longsong Stronghold. Therefore the town was set between the slope of the North Mountain and the Chishui River. As Roland puts it, Border Town was initially built to serve as 'cannon fodder'.[2]

Border Town was established roughly 30 years before Roland Wimbledon's arrival, a young place compared to Longsong Stronghold's 200 years of history.[3] It was set up by Duke Ryan's ancestor to be an outpost with the intention to serve as an early warning to the evil beasts' invasion. However, the pioneers discovered a mine rich with ores and gemstones in the Northern Mountain Slope and so it became practically a small municipality. Every year the locals mined gemstones and ores, exchanging them with the stronghold in order to gain shelter and food for the winter, however they didn't know it wasn't a fair trade. They went into the Stronghold for hiding throughout the winter. They often scammed the people of Border Town by purchasing high-quality animal furs at low prices.

Two years before Roland's arrival, the Months of Demons which happens annually has lasted for almost 4 months. Because the mined ore was only enough for three months worth of food, the greedy city official Reynolds who was responsible for supplies refused to provide additional grain.[4] It caused starvation among Border Town's population and the deaths of nearly one-fifth of its population (~500), which. Despite some nobles' complaints, Reynolds wasn't punished as he was Duke Ryan's son-in-law.[5]

The original citizens of Border Town consist of many people who didn't take the church's teachings seriously, and it can be assumed that Karl van Bate was the only one to be teaching them the church's beliefs. Therefore it was easy for Roland to convince the original 2,000 population to accept witches alongside them over the duration of 3 to 4 months of isolation.

When Roland Wimbledon arrived in Border Town, it counted 2000 people.[6] After accepting refugees from all over the country, the number of residents exploded exponentially. So much so that, right before the 'Project of a Million' was put to practice it had 200 thousand people[7] and right after the Elanor Skycruiser took off the population exceeded 1 million people.[8]

At the start, the main exports of the Border Town were from mining and hunting, and the bulk of the imports were food items. Everything would be transported through Longsong Stronghold or directly through the Redwater River from Willow Town.[9]

The mining exports contained all kinds of minerals, like iron, copper, sulfur, rock crystal, ruby, sapphire, with an annual output value of 1000 gold royals.[3] The minerals exported by the town weren’t paid for with the kingdom’s gold royals, instead they were paid for with the foodstuffs that arrived, as the Longsong Stronghold had the trade monopoly.

Roland's first policy was breaking the embargo, in order to stop the unfair trade with Longsong Stronghold. He started trading directly with Willow Town, selling ores and gemstones at market price and buying food, saltpeter and refined metals.[5] Indirectly under Lightning's influence, the witch brought in Margaret, Roland's main saltpeter supplier and a good merchant. Through Margaret, Roland was introduced to many merchants who wished to purchase his specialized products such as perfume, hot-air balloons, the steam engine and other unique stuff.

Agriculture was introduced and expanded, leading to a situation where the domestic production could sustain alone the entire population. Serfs are allowed to retain 30% of the wheat production, and that can only be sold to the State at a fixed price.

Industrialization allowed for the increase of productivity in the mines, smelting of metals and also for the very lucrative export of steam engines.

With the setting of the convenience market, a diverse assortment of innovative products were offered to the residents, such as perfumed soap, wine, mirrors and mushrooms.[10] Amenities like public bathrooms and piped water were also implemented.

Buildings and Places of Interest[] 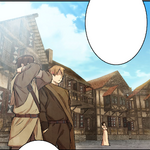 Manhua's depiction of Border Town before it was transformed into the city of Neverwinter.

The people of Border Town cheering for their Lord, Prince Roland.

A night view of the castle.

The castle at noon.

The castle during the Months of Demons

The castle after winter has ended.

Side View of Border Town's Castle and Government Affairs Office

The castle gate guarded by two of Roland's knights.

The City Wall during the Month of the Demons

Bird's eye view of Border Town during Month of Demons

The flag of the City of Neverwinter: The spears and the tower are from the emblem of the royal family, the big pentagram represents Lord Roland Wimbledon, while the smaller ones represent the City Hall, the Army, and the Witch Union.