Release that Witch Wiki
Register
Don't have an account?
Sign In
Advertisement
in: Stubs, Locations, Former King's City,
and 4 more

Edit
This is a stub. You can help out by adding more info here.

City of Dawn, formerly known as King City is the former capital of the Kingdom of Graycastle.

It is renamed the 'City of Dawn' after Roland Wimbledon took the throne.

It is located in the central region of Kingdom of Graycastle.

Population is around 30,000 people but it probably decreased by a lot when Roland started recruiting refugees in Neverwinter.

Perfumes and glassware produced by alchemical workshop were the major source of income for the royal family. 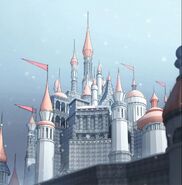 The Royal Castle at the former King's City of the Kingdom of Graycastle.