The Church of Hermes, more commonly referred to as The Church was the main religious body and a powerful organization in the mainland.

According to conventional teachings at the beginning, there were three major churches, which thought of each other as heretics and believed that their own God was the true one. This 'Battle of Faiths' lasted for nearly a hundred years, and in the end, one of them claimed the final victory. They declared that the heretics had been destroyed, and God has only one name that was the word of God itself.[1]

In truth, the Church was formed after the downfall of the Witch Federation by witches under Alice's command. Believing that the only way to win the war against the demons was by using God's Punishment Army, Alice and her Council decided on a course of action that would condemn countless future witches. Each Army soldier was created by combining the blood of a witch with God's Stone of Retaliation, then pouring it over a mortal to be absorbed through the skin, creating a kind of super soldier without thought or will at the cost of the witch. Moreover the success rate was not guaranteed, but it was believed to be an effective use of a non-combat witch, which made up 90% of their population. Through use of a Soul Transfer method uncovered from some ruins, other Witches would then move their souls into these new bodies that were effectively immortal. The trade-off was that they would lose their sense of touch, taste and pain, and learning how to use these new bodies would take decades. By the time the newt Battle of Divine Will began they would thereby have 3000 - 4000 extraordinary like beings to fight the Demons with, although one flaw was that this number could not be so easily replenished once the fighting began.

In order to carry out their plan to mass produce the soldiers without resistance, they decided that witches could not continue to act in a superior and privileged position. The Witch Union had to be disbanded, and the past had to be completely buried.

At first, this plan was reluctantly accepted by the other two Chiefs, but everything changed after the discovery of the Maze Ruins left behind by the Underground Civilization. Within it they found another way to fight the Demons, though it was no less risky than Alice's plan, even more so perhaps. The only difference was that they would be betting on the future instead of the present. This dispute caused a rift in the Union and the subsequent civil war (known as the battle of faiths in history) only ended after the deaths of Alice and Natalia, with neither side winning.

Unfortunately, this battle badly damaged the factions, and they virtually lost control over the world. The mortals who were unwilling to participate began to settle down, and led the indigenes to cultivate the land, gradually becoming what is now the Four Kingdoms.

Both factions then came to an agreement - the followers of Alice would journey to Hermes and create a new Holy City to enact the plan of the Church, while the remaining Taquila Witches would remain at the Maze Ruins to study everything for 100 years, with the Church providing God's Punishment Army bodies for them to use. After that time expired the Church would then return and reclaim all the research and would not negotiate again.

Witches were now no longer the chosen ones, instead becoming the evil ones who were allegedly lured into degeneration by demons as their 'messengers'.

After that, the Church continued to eliminate its remaining enemies on many occasions, including mortals who didn't belong to Starfall City. But the world order had already taken shape, and due to a lack of strength, the Church was never able to complete the unification of the continent. All of this was due to the early death of Alice. It is believed that if she had lived, the Battle of Faiths would have ended fifty years earlier, and after the Church accepted all witches into its membership it would have easily unified the continent. No one expected the Battle would continue for four hundred years.

In the proceeding years, the earlier Popes of the Church were all Witches, but at some point this practice ended and all following leaders chosen were mortal men. This occurred because of fear and greed.

In order to restore the witches' glory after defeating the demons, Alice had stipulated that the Pope's position must be taken up by an Extraordinary. But Extraordinary Witches were very rare, and it wasn't always possible to find the ideal candidate. Therefore, a few prominent ordinary witches served as the Pope - but weakness and cowardice were like poisonous snakes in the heart which could never be removed once they appeared. A mortal who served as an Archbishop at the time was afraid of being oppressed by the witches someday and therefore usurped the Pope's position. Following that, the Church was run by nothing more than a group of cowardly descendants who profiteered from the Witches' sacrifice.

Because of this betrayal they lost the most important knowledge regarding God's Punishment Army, either intentionally or accidentally, only now able to produce empty shells without transferring souls into them. Knowledge of the Maze Ruins was also lost, hence after the initial 100 years were up, the Taquila Witches never had any contact with the Church, not realising that Alice's will had been subverted by mortals.

In advance of the Third Battle of Divine Will, the Church heads decided to unite the Four Kingdoms under their rule in order to resist demons' invasion. Unlike the Kingdoms of Wolfheart and Everwinter, the Kingdom of Graycastle was too strong for direct confrontation, so they replaced king Wimbledon III with a doppelganger and through him published the Royal Decree on the Selection of Crown to make the royals fight and weaken the Kingdom, thus making it easier to absorb.[2]

Church taught that Demonic beasts and witches were Devil's minions sent to destroy humans and turn the mainland into hell. They advocate the torture and execution of any with found in the four kingdoms and that only through God's grace and a person be forgiven for their sins.

Under the pretense of caring for orphans, the Church maintained female monasteries in which new witches could appear under the Church's supervision. Every winter orphan girls from all Four Kingdoms were gathered in these monasteries where they would be taught basic education and Church's history and doctrine. In case a girl whose missing would be noticed was taken, Church usually blamed witches for this. If a girl awakened or "fell", she would be either raised as a Pure Witch or sacrificed in God's Punishment Warrior incarnation ceremony. If a girl didn't become a witch upon reaching her adulthood, she still would be useful for Church as an educated woman and continue her service for the Church. It was a common practice for most of the foster girls to go through repeated rapes organized by Church's officials either in monasteries or on their way to it.[4][5]

God's Punishment Army was the most powerful unit among their forces. Every warrior is a magically enhanced supersoldier with inhuman strength and lack of pain. Their existence and capabilities were kept secret from public. However due to the complete process of making these warriors, each God's Punishment warrior lose mental capacity and can only follow to simple commands of one individual. Once the individual dies, the God's Punishment warrior become dormant, some of warriors even tend to move to Fertile Plains.

Judgement Army was the main force of the Church. They were well trained, disciplined, fanatical and loyal to the organization.

Despite Church's enmity to witches some of them with promising abilities were trained as Pure Witches. They were convinced in witches' sinfulness, including themselves, and trained to redeem themselves through service to the Church.

Church had an enormous influence on people's minds in any large town of Four Kingdoms. Its followers could be mobilized as auxiliary forces to Judgement Army, spies, saboteurs, informers or witch hunters.

Due to its defeat by the Kingdom of Graycastle, the current Church abandoned Hermes Plateau and ran to seek refuge to Kingdom of Wolfheart, on the Archduke Island. The hasty escape ruined their reputation among people, while remnants of Judgement Army deserted along the way. The conflict between Church's refugees and former priest and noble of Archduke Island resulted in loss of most remaining God's Punishment Warriors. Without the Holy Book, it would be impossible to create new warriors again[6].

Currently, it is under the control of Roland Wimbledon through Isabella, who has reorganized the remnants that were left in the Old Holy City.

Before unifying wars the Church kept neutral relations with Four Kingdoms and barely involved in their affairs. By the start of the unifying wars, the Church's relations between itself and the Kingdoms of Wolfheart and Everwinter turned sour when the former launched an invasion on the latter. While the other two kingdoms were vigilant against and wary of the Church, neither dared to launch an attack.

The Tower of Babel at Hermes Cathedral.

The North Gate of New Holy City, while the drawbridge is being let down during the fight against a horde of demonic beasts and hybrids.

The three archbishops (from left to right) Heather, Mayne and Tayfun, observing the church's battle against a horde of demonic beasts and hybrids from the Tower of Babel.

A group of Judgement Army warriors led by Alicia Quinn, right after they each swallowed a Cold Expelling Pill, as they prepare to defend the north gate of Hermes against a horde of demonic beasts and hybrids. 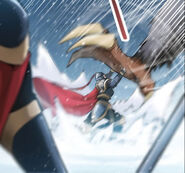 A God's Punishment Army warrior fighting head-on against a flying demonic hybrid.
Add a photo to this gallery

Retrieved from "https://releasethatwitch.fandom.com/wiki/Church?oldid=8040"
Community content is available under CC-BY-SA unless otherwise noted.