Release that Witch Wiki
Register
Don't have an account?
Sign In
Advertisement
in: Characters, Male Characters, Knights,
and 8 more

Chapter 2
Carter Lannis is the Chief Knight of Roland Wimbledon.

Carter is described as a really handsome tall man, wearing a suit of armor. His hands are "thicker than average human's body."[1]

In the mock fight between him and the ashes, he wore leather clothes that were easily portable. The waist even had custom-made cases that allowed him to place the revolver on both the left and right sides separately.

Carter is a brave and loyal knight. He has followed many of Roland's orders, no matter how bizarre they seemed.

He was also a chatterbox. Although the knight was a good speaker, he didn’t excel at debate, encountering a smooth talker like Roland he completely lost.[2]

Carter once visited noble ball in City of Dawn.

As Prince Roland's chief knight, Carter was at Anna's execution trial when the former all of a sudden postponed execution. He objected to prince's decision, he was also wary of witches' retaliation against them, but was mocked by him instead.[1]

Carter was trained in all forms of traditional combat that was expected of knights. He was also very adaptable, able to become reasonably skilled with the various new firearm weapons he was asked to use by Prince Roland in a relatively short time.

God's Stone of Retaliation: He ask to have on during the mock battle against ashes.

Two Revolver: Gave them to him along with ten iron bullets by Roland to use against ashes in to mock battle.

Knife: It was meant to protect itself if ashes got too close to him.

Carter was initially wary of Prince Roland, because of the latter's tendency to cause a scene. When the prince later showed incredible intellect and altruistic goals, Carter became one of his loyal followers.

Carter first approached May as she exited the theatre, he invited her for a drink. He and May started dating, and eventually Carter proposed to May and they married. They later have a son.

Carter seems to harbor a subtle rivalry to Ferlin Eltek due to the former's wife's past feelings for him.[3] 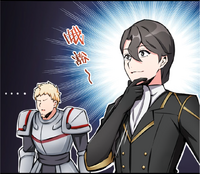 Carter and Roland's reaction to the power of the steam engine.

Carter kneeling down before Prince Roland.

Carter standing with Roland in the castle gardens. 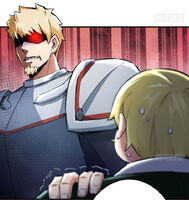 Carter gets ready for his date with May.