Hand of the King

Gandalf (Only in LN)

Chapter 1
Barov is Neverwinter's City Hall director and Premier Minister of Kingdom of Graycastle. He was originally dispatched to Border Town as Roland Wimbledon's governance aide.

Barov is a man in his 50s or 60s. He had worn white robe before changing into black suit.

He is an ambitious manager and enthusiastically completes task after task, despite believing Roland is possessed by Devil, since it increases his power and control.

He feels jealousy to those who are higher ranked than him and he wishes to flaunt his authority to those people who are above him, expressing regret when he couldn't rub his status in the recently banished finance minister's face.

Barov is highly ambitious and dreams of being Roland's prime minister, turning down a position as leader of the recently captured King's City so that he could remain as the leader of Neverwinter's City Hall. He feels threatened by the competence of Edith Kant and works hard to prove that he is more useful than her.

Barov had worked as assistant of finance minister for twenty years and gained vast knowledge of governance methods and commodity circulation.

He was assigned to prince Roland as administrative assistant.

Next morning after prince Roland postponed the execution of a witch, Barov went to convince him to immediately put her to death, fearing other witches would try to rescue her. Nonetheless, Roland ordered to lead him to her cell personally. In prison he was terrified of prince's idea to prove her power and strongly objected to releasing her from the locket. When they returned to the castle, the prince asked for various records and explained reasons to hire witch; in short, he decided to gain throne with witches' assistance and stop Church's ever-growing influence.[1]

In the past, he had found a coin of the Witch Cooperation Association in the forest of the Western Region and secretly retained it. He originally wanted to use it as evidence of Roland colluding with witches in return for his own safety, for when the church attacked the Western Region. But now, this emblem had become his lucky charm.[2]

Barov was one of the fews to suspect Roland's origins, and he was the first person to realize that Roland has been replaced, due to the fact that he was always with the prince when Roland is making plans for the first few weeks. However he will slowly accept Roland since his actions are worthy for a king position, and as Barov's father once said, don't question things and have faith in your master.

Rival for power. Sometimes he feels that she is the same type of person as him.[2] 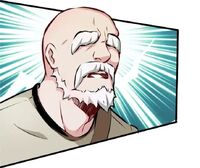 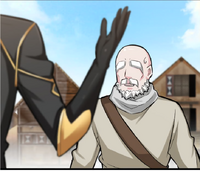 Barov wearing his robe.
Add a photo to this gallery

Retrieved from "https://releasethatwitch.fandom.com/wiki/Barov?oldid=8133"
Community content is available under CC-BY-SA unless otherwise noted.