Release that Witch Wiki
Register
Don't have an account?
Sign In
Advertisement
in: Characters, Male Characters, Royal Family,
and 10 more

Chapter 1: Starting Today, I'm a Prince!
Ayling Wimbledon[n 1], also known as Wimbledon III, was the deceased King of Graycastle and the father of five royal descendants: Gerald, Timothy, Garcia, Roland and Tilly. Sometime in the past, Ayling Wimbledon took the crown from his brother.[1]

After spending several months in the church's prison, Ayling's skin turned pale and his limbs became thin and shriveled, his beard reached his neck, and wrinkles on forehead became more distinct.[2]

Ayling Wimbledon was a good and intelligent leader. He cared deeply for his family and was devastated when his wife died. He supported the Church's policy of labeling witches as the devils during his rule. However, this trust was destroyed when the Church used him as the stepping stone for taking over the Kingdom of Greycastle.

At the end of summer, in day of Prayer, the Church captured Ayling and replaced him with a doppelganger.[1]

The false "Wimbledon III" announced Royal Decree on the Selection of Crown Prince, according to which his descendants would be given a city to rule. The one who shows the best result in territory management would become the heir of Kingdom of Graycastle.

When half a year passed after Ayling’s imprisonment, archbishop Mayne visited him. The king demanded answers of what is happening with his sons and daughters. Disbelieving what he heard, he eventually realized the ambition of the Church: set off his children against each other and take control of weakened kingdom later. Before his death, Ayling Wimbeldon cursed Mayne that he will be waiting for him in the deeper layers of Hell shortly before dying.[1]

"Wimbledon III" lies on his deathbed. 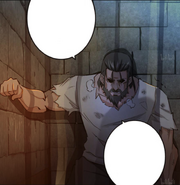