Release that Witch Wiki
Register
Don't have an account?
Sign In
Advertisement
in: Characters, Female Characters, Nobles,
and 7 more

Aurelia Medde is a noble of Elk Family in the Western Region. She is romantically interested in Petrov Hull.

Aurelia is a beautiful lady.

In honor of her sixteenth birthday, Earl Elk organized a banquet, and gathered all the prominent nobles of the Western Region. She sent Petrov an invitation with a handmade handkerchief within, and at the party, she showed him signs of attention.[1]

During the Longsong Stronghold's noble attempt at rebellion, Aurelia went into the dungeon to look for her brother Rene, who was held captive for not agreeing with the plot to rebel. She was with him when the First Army stormed the manor[2] and left the dungeon together with him to see what had happened.[3]

She is romantically interested in him. However, Petrov only sees her as an innocent little girl.[1] 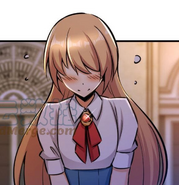 Aurelia in her 16th birthday party, as she is facing Petrov.

Aurelia, as she is being protective of her brother against Iron Axe and his soldiers.